I Worry About Plumbing

I wonder if Ennio Morricone ever replaced a washer, or tightened the grub screw on a bath tap? I am thinking this as I listen to his composition, 'Gabriel's Oboe'. Morricone died this week, as one day I will, and I didn't know till now that he was an avant-garde classical composer: that he regarded these seldom-heard works as his important ones.

This existential mood of mine is driven by sleep-deprivation and by the fact that my hot bath tap is broken. The mixer taps are new, so not strictly broken, but loose. But it might as well be broken as no water comes out. I'm worried I won't be able to fix it despite having 'plumbing previous' (see my first ever blog). The sleep-deprivation is explained by the fact that my main occupation, my job, has been tough this week, and by the fact that my new neighbours have woken me twice in six days with their parties - at 4.30am. 4.30am!  You've got to admire them, or curse them, or hate them for being young, or go round and ring on the doorbell and ask them politely if they could turn it down and then go and sit out on the garden watching the late glow of dawn, the seagulls uplifted and up-lit by pink light.

Sitting on my garden, I tried to think of all the times I was annoying when young as a way of developing greater tolerance to those who probably look at me as slightly less than a real person on account of my being 55, in my pyjamas and having wild lockdown hair. When I was their age, I thought my parents stuffy for going to bed at 9pm on Saturday nights before church on a Sunday. I was much less considerate than I might have been. There were times when I returned to the vicarage to creep up to my attic bedroom close to dawn to fall into a decaying and guilty sleep. Forgive me, father ...

Sitting there, on the roof, as dawn brought the day into focus, I thought about the avant-garde part of my life - not my main occupation, not the lecturing job for which I am infamous to several hundred social work students past and present, but the part of me that I want to fulfil as much as possible before I die: the poetry part. The words that swim through my head, that arrange themselves on the page. I thought about the way that the main stuff squeezes this less-known part until it squeaks, needs attention, needs to lie in the bath because there is no chance of swimming pools opening any time soon, and I need my body to be weightless from time to time. I thought with gratitude of Anna's Poetry Breakfast at Home, of Andrew, Carol and all the people who see and respect this part of me.
Poetry Breakfast - find the wonderful array of readings and music hosted by Anna here.

And now it's nearly 9.30am and I'm not floating into a dawn sleep because I want to catch Abbey Hardware when it opens to buy a set of Allen keys and ask advice, through my mask. I don't have what I need to fix my tap, which has a screw loose.

'Gabriel's Oboe' is a soothing part of the soundtrack to 'The Mission', a violent film I'd watch again, even though it's about an appalling history. Colonisation. Conversion. Corruption. Compromise. Cardinals ... Morricone's soundtrack is just right, as it is for The Good, the Bad and the Ugly, and Cinema Paradiso.

Ah Ennio. Rest in peace. Thanks for all the music, especially the stuff that's impossible to find on YouTube, that's swamped by your main fame. Forget I ever mentioned plumbing. 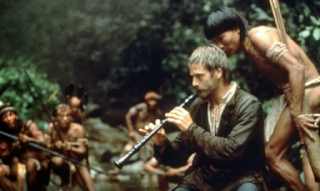