I Enjoy The Memories

It's that time of year - the Edinburgh Fringe has been cancelled, but my mind is still drifting northwards and backwards. 2013. Threesome's first appearance on 10th August - we'd hardly written the script by 9th August, the same day I met Ms Beeton for the first time.  It's LJay's birthday today, so that has added to my nostalgia.

And here we are, or were, outside the Word of Mouth Cafe,  highest numbered venue for that year ... left to right ... Ms Beeton, Someone's Mum, Jay Walker. 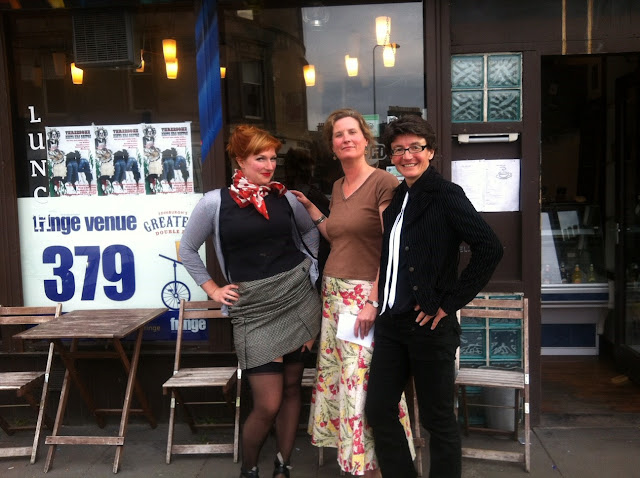 I have the look of someone freed from the responsibilities of being any good at performance, and enjoying it.

The show was in 3 parts - I was the opener (or 'delicious entree', as described in one of our two 4 star reviews) with a piece based on the Seven Ages of Man speech from As You Like It. The Seven Rages of Woman is a poetic romp around ... well, some of the rage I felt about a restrictive evangelical upbringing and some of the rage I felt about the lack of representation of women in film, and several other rages,: approximately seven of them in fact. Listening to a sermon about women and submission yesterday, some of this rage was momentarily reignited.

Since this photo was taken, there have been new happenings: a beautiful baby for Ms B, glasses to correct my eyesight, a new suit and tie for LJay, and suchlike. But when I look at it, I enjoy the feeling I felt then, right then, at the moment Peter took the shot. It comes flooding back, the camaraderie, adrenaline, freedom, the reckless pleasure of the name of our troupe. And, as Ms Beeton might have said of her microwavable chocolate sponge cake (whose making was the pinnacle, piece de resistance, of the show), the feeling is marvellous, darling!