I Phone A Friend

I phoned Bob this week, after years of thinking about him, sending and receiving Christmas cards. Happily, joyfully, he's well, in his 90s now. North London's still audible in his vowels, although he moved away, as I did, years ago.

When we met, I was 5 or 6 years old, and he was around 40. He had been widowed: devastated by the death of his first wife, and turned up at my father's church, looking for consolation. I was bored, hanging around, at a loose end while something was going on: prayer, singing, meeting, adults chatting - something a 5-year-old couldn't, or wouldn't, share.

There I was, small, awkward for my age, idling, waiting (it turns out) for a hand to hold -  metaphorically, emotionally, psychologically, and literally.

"I noticed you," Bob recalled towards the end of our conversation, "and prayed that you would come and hold my hand. And you did."

I thought, momentarily, of naming this blog I Answer A Prayer, but my views on prayer are complicated. I realise this is one of the reasons I haven't phoned Bob for so long. I didn't want him to be disappointed that I've turned out poet, not angel.

In c.1969, Bob and I, separated by a generation, were attuned to each other in the way that human beings can sometimes be, despite the gaps between us. His prayer a call, my response a sense that here was someone safe. What did we notice in each other? Gesture, tone of voice, openness?

After our phone call, I know that Bob understands, looking back, that I needed his care as much as he needed mine, and, we spoke of this for the first time. "Your father was very disciplined," he understated.

He prayed. I walked over, took him by the hand, hung on.

I loved Bob, and for a year at least, we used to sit together in a pew at the back left-hand side of the church each Sunday. I can picture my young self, all unbrushed hair and hand-me-down clothes, walking through the west door and up the aisle. I'd see the back of Bob's head and run the last steps to join him. He was always in a suit, shirt pressed, hair neat, tie tied, shoes polished. He was never late, never missed a Sunday, never passed judgement on my disheveled appearance. I sat next to him during the interminable services, small and fidgety, comforted by his presence.

When I was older, 7 I think, I joined the choir, and suggested to Bob that he married Vera, though I'm now sure he'd already had the idea himself. They married, and Bob moved into the flat at the bottom of the vicarage where Vera lived. They often looked after me and my brothers when my parents were busy, and didn't complain about us jumping down the stairs onto their ceiling, riding our bicycles through their washing.

Bob and Vera were lovely together: for more than twenty years till her death, they found happiness in each other, and a shared way of being. They illuminated the years of my childhood with kindness, cheerfulness, creativity, and play.

When Bob and I finished our conversation I cried a little, feeling both loss and a sense of exhilaration. The connection between a sad young man and a little girl, albeit five decades ago in another dimension, is still real and it is still comfortable.

What will survive of us is love. 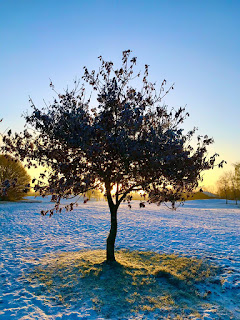 Email ThisBlogThis!Share to TwitterShare to FacebookShare to Pinterest
Labels: What will survive of us is love; phone; friend;