'When I feel like that, I ask myself what would a young, white, confident man in tech ask for? ...' is the best advice I've been given in March. It helped me to leave a couple of the questions on the recent census unanswered, and to launch my Facebook page this week.

Questionnaires, however well-designed, try to squeeze us (in the case of the UK census, all 66.65 million of us) into boxes. I'm averse to small spaces unless they are ones I step into of my own accord, zipping up the flap behind me. But it's mandatory to submit the 2021 census, so I clicked the required boxes on the online form last Sunday and pressed Send.

The same day, I created a Facebook page in an attempt to offset some of the challenges of publicising a new book at a time when the pandemic has made the usual readings in bars, cafes, and libraries impossible. At an event pre-lockdown, I might sell 5 books following one of these (usually) free events, sometimes more, occasionally none. I offered a discount, signed the books as requested. It was a good exchange all-round.

The questions I didn't answer on the census were about religion and sexual orientation. In writing this, I have already given you more information than the National Office of Statistics will receive about me. Perhaps I was influenced by the recent graffiti (graffito?) I saw near the station which reads, JESUS WAS BISEXUAL. How odd, I thought, to choose that as a daub, but then again, it did get me thinking. So too the other graffito under the railway bridge: GREAT NESS IS BORING. How odd, I thought, to condemn a hamlet near Nesscliffe so specifically, and to travel ten miles or so into town to do so.

Questions about sexual orientation are even less conducive to box-ticking than questions about religion. Under each of these census questions I clicked Why we ask this question to find out how it could be relevant, was told it will help the design of services. I simply do not believe this. What will help with the design of services is the campaigning work of organisations like SAND . The negative impacts of labelling continue: 'heterosexual', 'gay', 'lesbian', and 'bisexual' are not terms of equivalent meaning or stigma when we're standing up to be counted. I would daub that somewhere if it wasn't so long (when does graffito become graffiti?) and against the rules.

One of the hesitations I felt about launching my Facebook page was that I had to think about which categories of people might like my work. The categories don't include those who don't like books: I've already been told. Aside from that, it's hard to be sure enough to tick boxes, although there has been a particular interest shown by people who went to Durham University, though that doesn't include a scattering of keen readers in Australia. Except for Penny.

My main reluctance, however, was that, as I said to my young advisor, promoting my book feels like asking for money. 'When I feel like that,' she said, 'I think: what would a young, white, confident man in tech ask for?' And buoyed up by her refreshing, honest courage, but not in pursuit of greatness (which is *ohhhhh! that's what it means* boring) I pressed Go. 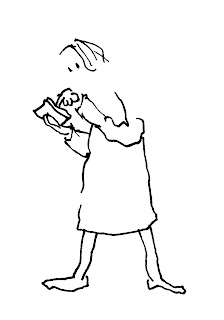 I Text The Poet Laureate